Andalucia in January. Escaping the cold and rainy weather in Scandinavia for a few days. Go and explore those endless gravel roads and vast landscape in southern Spain. See the small white house villages clung to mountainsides. Sounds like a recipe to cure a winter depression? I think so.

But your imagination and reality isn’t always the same thing.

I had been looking forward to a three day training and exploring adventure in wonderful Andalucia. Weather forecasts had been promising for a while, and the dry and mountainous landscape felt like the epitome of a true gravel adventure. Normally I would bring my own bike, but sometimes it’s just a hassle to travel with your bike – especially on planes. So this time – bearing the short time in mind – I had decided to rent a gravel bike in Málaga. It was a brand new Felt bike with wide 47 mm tires. Perfect for exploration.

But remembering the always true Velominati rule 9 – “If you are out riding in bad weather, it means you are a badass” – there was no way out of it.

So there we were me and my travel companion, Anders, on our gravel bikes in pouring rain on our way out of Ronda – our base for this 3-day adventure. We had decided to skip the gravel part on this first dystopian “bad weather”-day and take a ride around the Embalse Zahara-el Gastor lake and up the mountains. It somehow felt like a better idea than getting lost in a mudslide off-road.

But as it always is when you’re out riding in foul weather: You just adapt and dig in. As long as you’re feeling somewhat warm it feels like a rite of passage you just have to get through… and suddenly… what at first appears to be an unstoppable opponent becomes – if not friend – then manageable companion.

After tens of kilometers of getting into the rainy-riding-mode and a quick stop at a lonely gas station to get our energy stores re-filled, we started the round around the reclaimed lake. Beautiful scenery unfolded and we had the roads almost to ourselves. Colors of green, blue and grey mixed and made shimmering reflections on the wet tarmac.

We had pointed out the picturesque village of Zahara De La Sierra as our turning point, and we knew it would involve some serious climbing. But when you’re out exploring new territories you never know what to expect from a climb. What on a route profile can seem like a walk in the park might feel like a knee breaker when you approach it in real life. Part of the fun and challenge. The Las Palomas climb after leaving Zahara was like that. A steep and winding road zig-zagged it’s way to the top. It got pretty cold and on the top we were freezing too much to stop for a classic summit selfie. Instead we rushed down the descent. I couldn’t feel my fingers and were shivering from cold as the rainfall turned up the intensity more than a notch.

There’s only one way out of being cold, wet and miserable on the bike. Turn up the watts. It keeps you warmer and makes you focus on the speedwork. It was full throttle through backroad and orchard country with small villages hiding in the haze.

We didn’t really notice the cobblestone approach to Ronda. We were in need of a warm shelter, a hot shower and a clean bike. With great confidence we could tick off the Velominati rule #9 for the first day of Andalucian adventure. 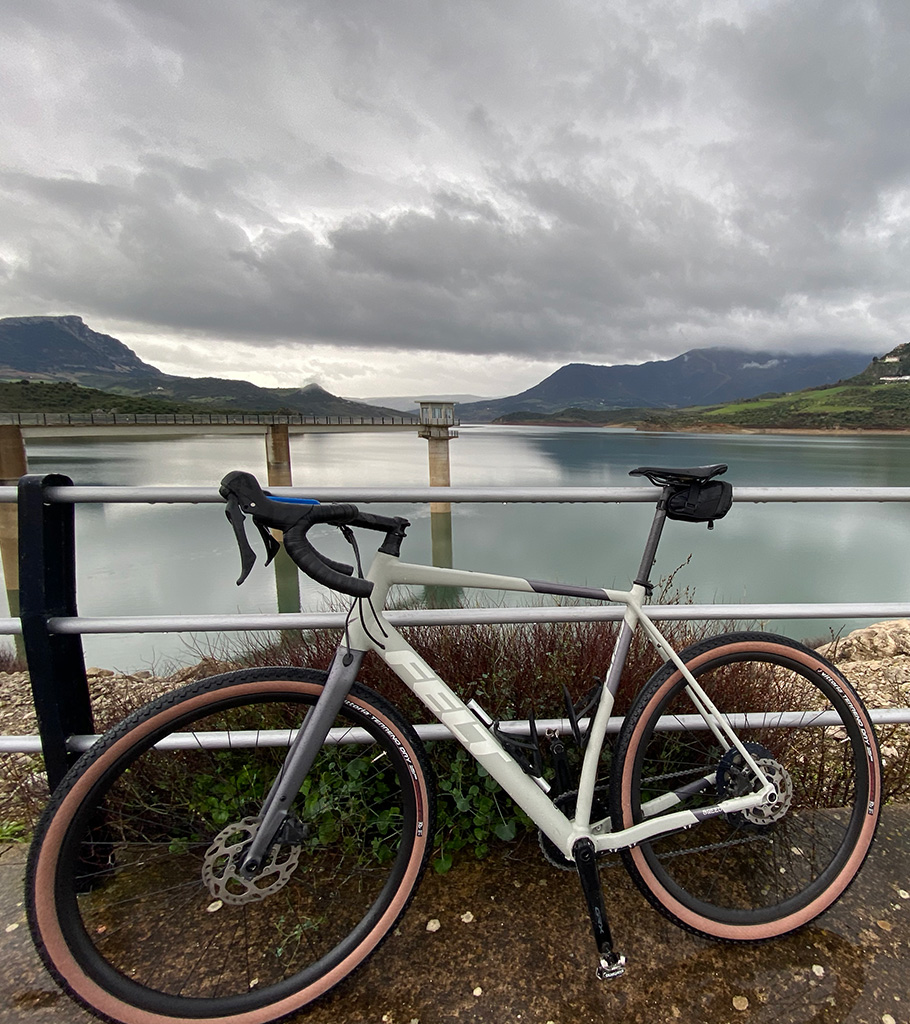 Day 2 was perfect. Blue skies and approximately 10 degrees celsius. We were ready for gravel adventure. Just after leaving Ronda we were immediately on gravel roads and saw more than a few MTB aficionados heading in the same direction. Promising. Many gravel roads are private property though and they don’t want intruders on their premises. So what can look like accessible roads on a map are often fenced farmland guarded by ferocious watchdogs. But when you know where to go – and we did after local tips and research – Andalucia offers some gravel roads second to none.

Descending on gravel is a technical bike skill. It’s not as crazy as downhill MTB, but you have to be rather good at handling the bike and be prepared for a serious bumpy ride. I love it and we had more than one fast rollercoaster experience while descending into the more lush farmland.

The excessive amount of rainfall, which also had resulted in floodings in Málaga further south, meant that some parts of the gravel roads had giant pools of water. Riding through such a thing is always an adventure. You never know how deep or muddy it is. Just cross your fingers and go full speed. Great fun. 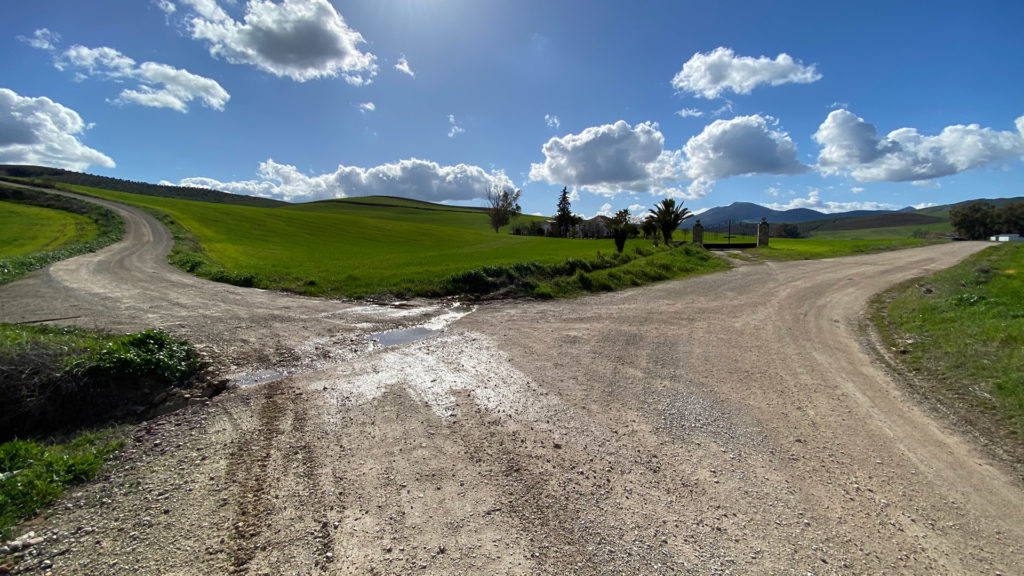 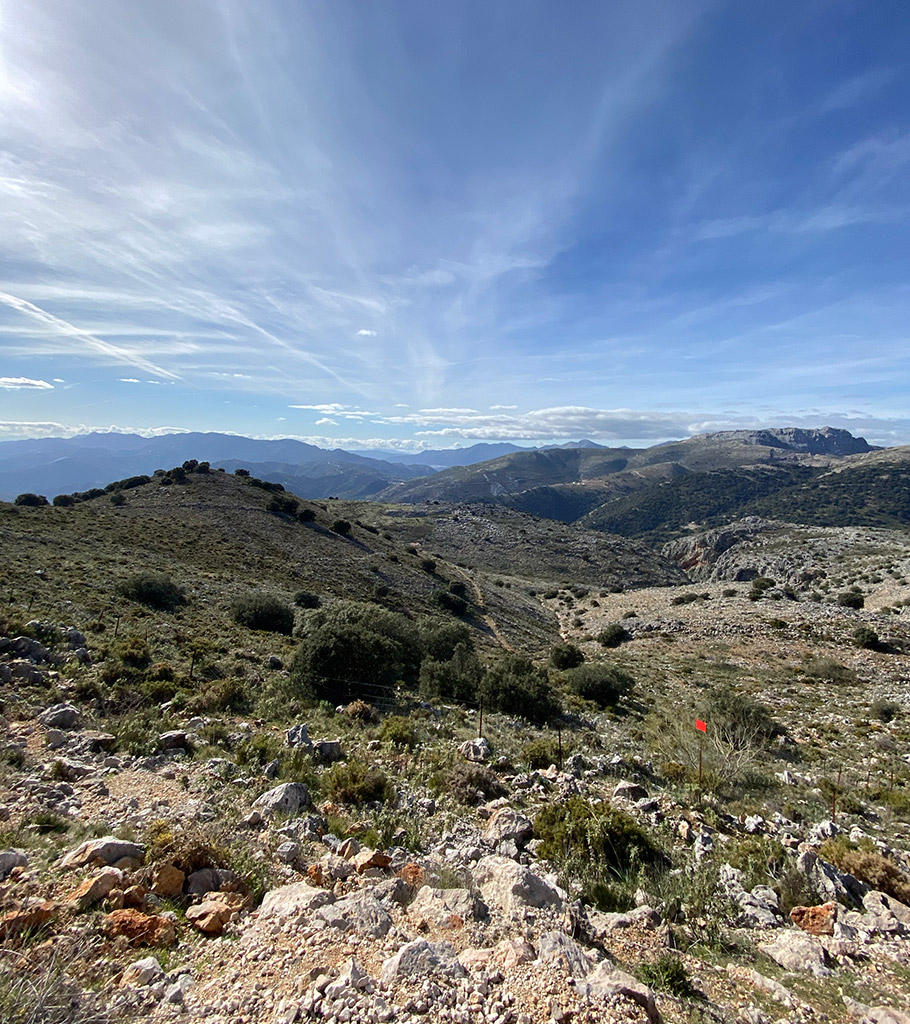 Travelling in January to Andalucia backcountry means very few people on the road and vast arid landscapes mixed with oases of lush farmland. It feels just right and like the cornerstone of gravel riding. But travelling in the winter also means dusk comes early, so we had to cut the stages shorter than we imagined. But even though we got fewer hours on the bike than we would have in summer, the light from the sun coming down on the mountains before sundown, is just special at this time of year. 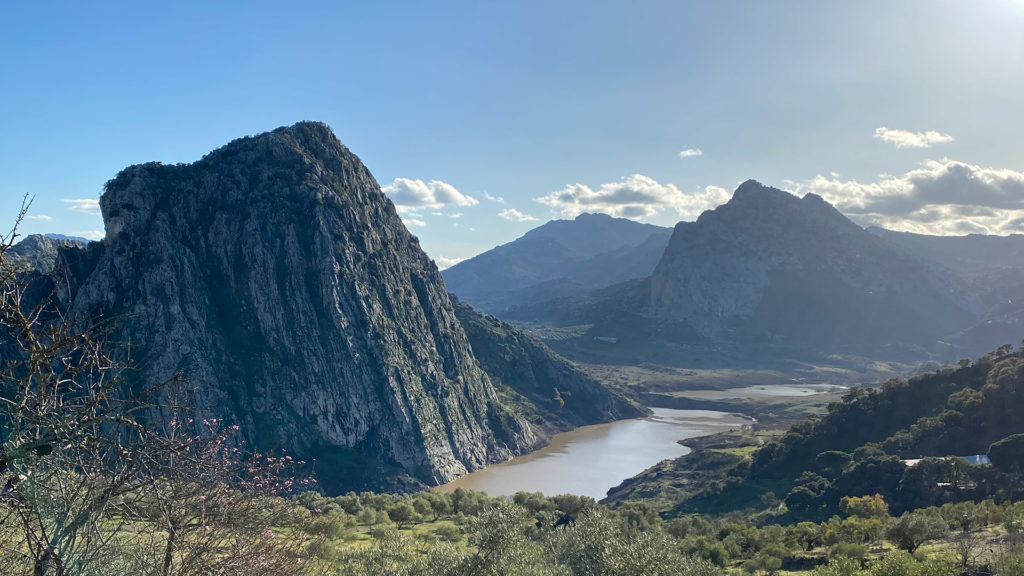 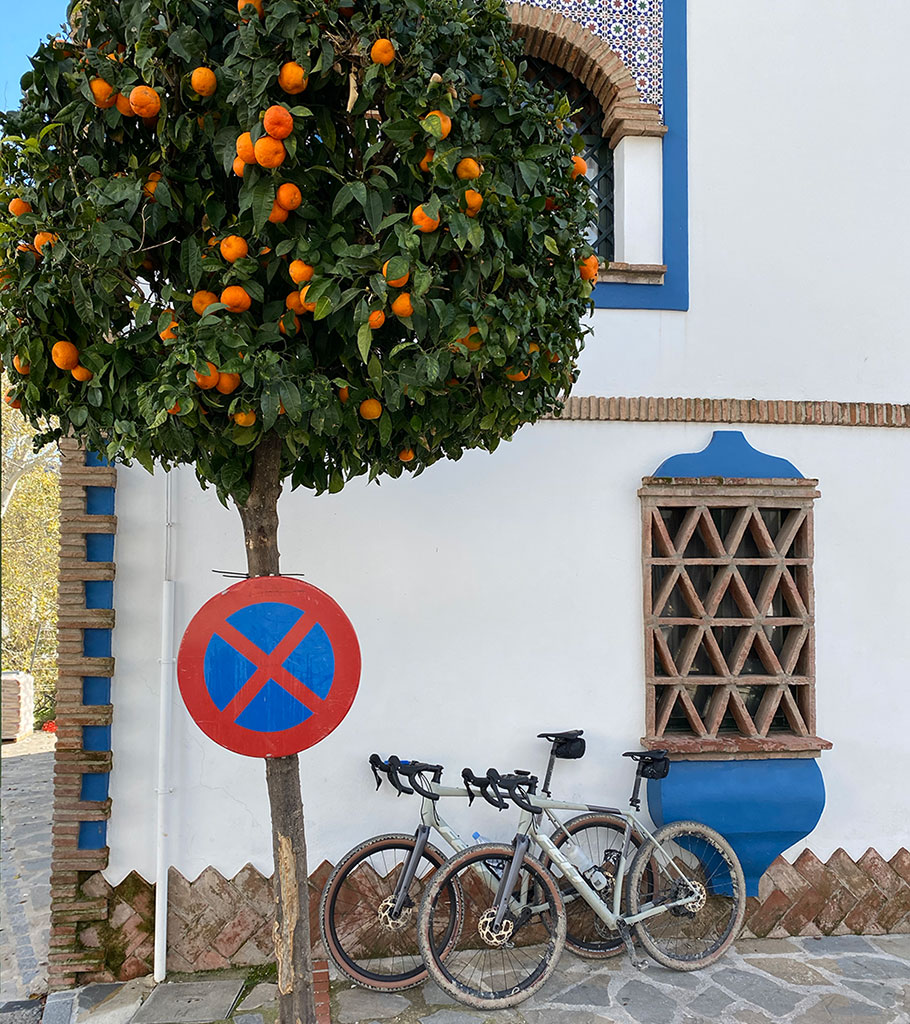 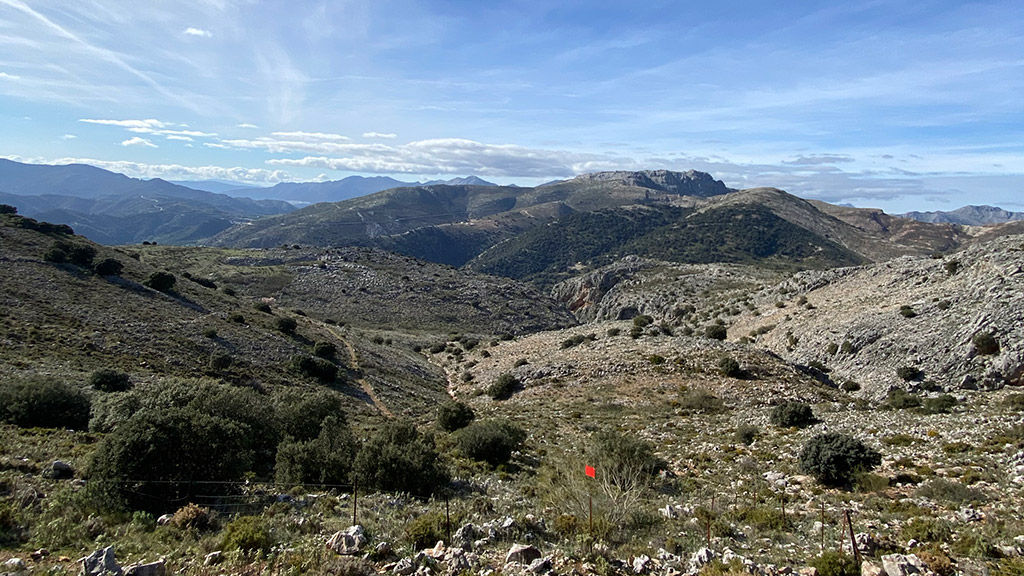 Last day on the bike was an early start. We wanted as much time on the bike as possible and we wanted gradients. And we sure got it.

After only 2 kilometers of riding we were onto the first climb. Not steep but a long tarmac climb leading to the start of a bespoke trekking route in the Parque Nacional Sierra de las Nieves. Fresh start to the day.

After the climb we had a short – but high speed – descent into the sleepy mountain village of Parauta: Our gate to gravel road adventure. A gravel road which offered a first 3-4 kilometers of fierce descending with gradients between 15-25%. One of those descents where you put all your body weight to the back of the bike, squeeze the brake levers and hope it will withstand the pressure. The descent suddenly came to an end as it was crossed by a genuine river. We jumped off the bikes for a team discussion on how to cross it. My knuckles were completely white from all the braking, so a small break was indeed welcome.

We did reconnaissance of the river bank and water temperature, but after discussing pros and cons we decided it would be too risky to cross it. A return was the only way out. We had to take a very deep breath, swiftly get our cleats into the pedals and start hammering watts at the lightest gear possible. If it was hard getting down, getting up again was a true test of manhood. I think I could taste breakfast again and I was sure my heart was coming out of my chest on the way up. Pew! That was a hard one… but that’s how adventure is. Just as we like it.

After our second involuntary visit to Parauta we decided to head for the town of Juzcar some 15 kilometers of mountain climbing away. It was a great and stunning climb with breathtaking natural scenery, but all the epic riding and scenic impressions was immediately replaced by laughter and wonder as we entered Juzcar. All the houses were painted in the same light blue color. As in ALL the houses. Strange since almost all villages around here are immaculate white. As we turned around a corner we understood why. A giant Smurf statue greeded us and we suddenly noticed a bus full of tourists being unloaded. What we found out was that this town is known as Smurf village. A brilliant strategy to attract tourists to a sleepy backcountry Andalucian village. A strategy which has increased visits by a staggering amount. But we were not here to engage with Smurfs, so we continued after a quick lunch. 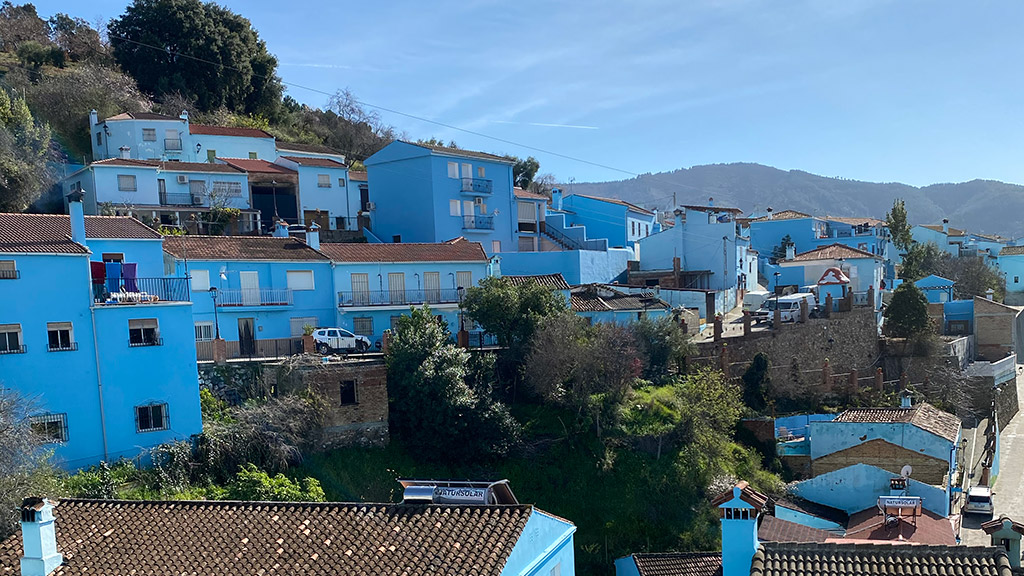 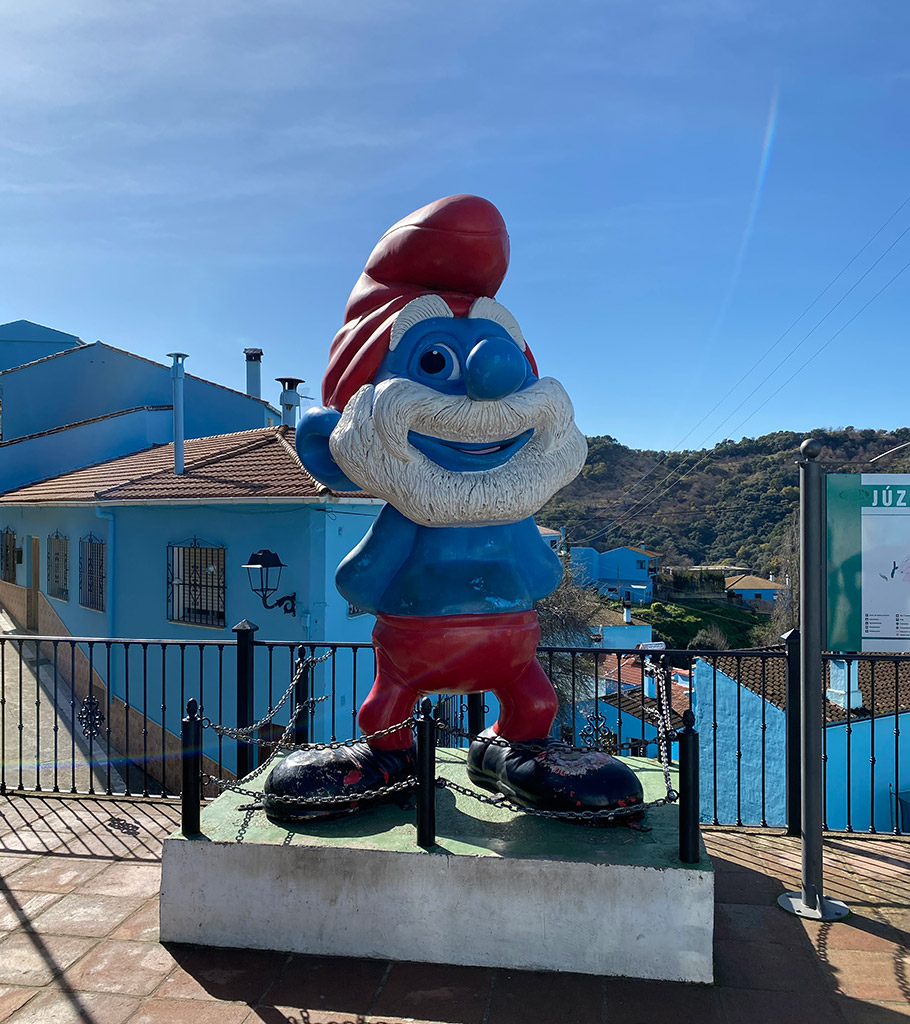 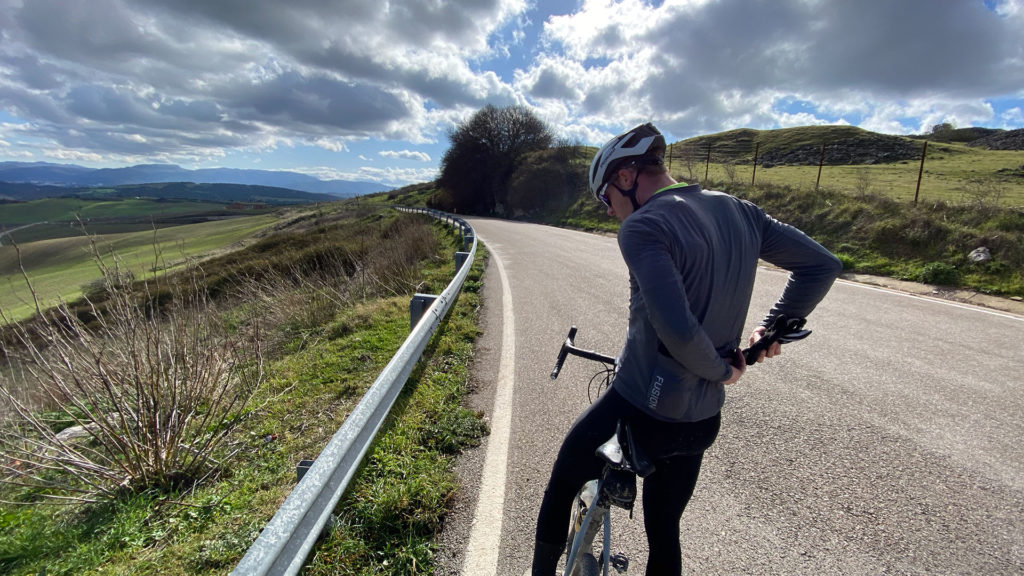 We hadn’t decided beforehand that day 3 should be our King stage, but that’s how it turned out. Climb followed climb and we got to see great isolated landscape with a perfect Andalucian flavour.

Legs were smashed when returning back to Ronda after some serious altitude, and even though it can sound weird for the uninitiated, that’s a feeling you crave as a bike rider.

Andalucia is a dream come true for bike riding and has all the ingredients for epic adventures. Even if you should experience some rare rainfall in these parts of Spain.